I purchased a male Border Fancy canary mid January of this year and my canary still doesn’t sing. He makes a tweet sound but that’s it. Sometimes it’s kind of raspy though. I do noticed that he has the body language like if he were singing sometimes and he opens and closes his beak but makes no sound like if he was on mute. Is that normal? Should I be worried that something is wrong with him or maybe I was sold a female instead? Should I just wait and it’s just a matter of time before he begins to sing? There is a black ring on one of his foot if that means anything. How can I tell the difference between male and female?

Firstly, if you ever think something is “off” with your bird, it’s always best to first seek the advice of a licensed avian veterinarian. They can also do an inexpensive blood test to determine for sure whether your bird is male or female.

It’s important to note that male Canaries sing to attract a mate and to establish his territory.

I would first check your Canary’s cage. He should have a cage that is not too large for him and that is placed high (human eye level or above) in a bright room with no drafts. Also make sure there is nothing above his cage.

Canaries usually don’t sing when they are molting – which is common in the summer months. If it seems like he is shedding some feathers, then this might be the culprit.

His age might also be a factor. Most Canaries do not start to sing until at least 6 to 8 months of age.

If none of these factors are applicable, you can do a test by placing a mirror in his cage. He may start to sing to attract this “mate”. However, this singing will eventually stop, so it’s best to only use it as a test.

I hope this helps!

Want to join the discussion?
Feel free to contribute! 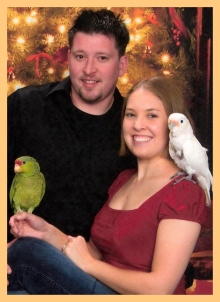 We love pet birds and parrots and can’t wait to help you find your perfect companion!